A veritable jungle of wild cats roam off of I-85 in Rockwell, N.C., about as far away from the real jungle as possible. Tiger World, a nonprofit private zoo, is worth a visit from anyone who loves animals.

Sometimes a well-meaning zoo or private owner buys a threatened or endangered tiger he or she cannot care for properly.

Some of the cats are even well cared for but are rescued from zoos that have hit hard times or private owners who have moved on or died. 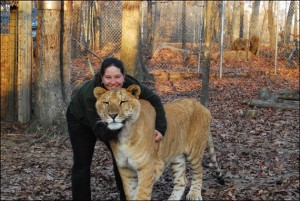 That’s where the founder of Tiger World, Lea Jaunakais, comes in.

Jaunakais discovered her dream of saving animals from the cruelty of humans at age three, when she watched a National Geographic program about tiger poaching and made up her mind that she wanted to help save them.

She found a way to do just that after she received a degree in animal behavior from Arizona State University.

“I then realized that I couldn’t do much about the tigers over in Asia, but I could do things in America,” she said.

The largest purchasers of poached tiger parts are American business people. Education, Jaunakais said, is the best remedy for the problem.

Tiger World is host to 28 tigers and 15 other big cats. Tiger World has even bred a liger, a cross between a lion and a tiger, which grows to be bigger than both parents.

Tiger World goes through about 1,600 pounds of meat per week, almost all donated by local farmers.

“We wouldn’t be able to support so many animals without them,” Jaunakais said.

As an educational center, Tiger World tells visitors about the majesty of the wild tiger and offers appreciation of big cats a few feet from their noses.

The 10 staff members of Tiger World are all very close with the animals.

“We raise them to not fear us,” Jaunakais said. 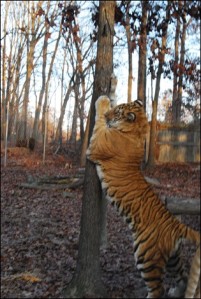 She and the other workers integrate themselves into the tigers’ lives, administering antibiotics and performing medical exams without anesthetizing the animals. Jaunakais and the more seasoned workers even walk into the tigers’ holding pens and pet them like one would a house cat.

“They are not our pets,” Jaunakais said. “They are just comfortable with us.”

A walkabout of the Tiger World campus takes between 30 minutes and an hour. Baby lion and tiger cubs play with balls and chew toys, and lemurs clamber around their habitat  peering curiously at  viewers. Free-range peacocks wander the trails and peck at visitors’ shoes.

Tiger World presents the animals up close and personal, instead of at a distance like at many traditional zoos.

Tiger World recently received nonprofit status and is now exempt from some taxes that corporate zoos may pay. The emphasis on rehabilitation and care makes this zoo unique in a world where some zookeepers care for their animals as a job, rather than because of their passion for animals.

Jaunakais said after 10 years, she was finally living her dream of rescuing tigers.

“So many people have an obstacle in life, and they stop trying,” she said. “Your dreams can come true.”