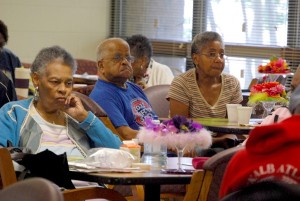 Solicitor General Sherry Boston hosted a bingo event at several senior centers around DeKalb. She said getting the seniors together for bingo provides an opportunity to educate them about the risks and signs of elder abuse. Photos by Lauren Ramsdell

Senior citizens in DeKalb should really only worry about B-I-N-G-O, not A-B-U-S-E. That’s the thinking behind the recent events hosted by DeKalb Solicitor General Sherry Boston. Gathering seniors from the community for bingo, Boston discussed signs of elder abuse.

“Unlike other types of crimes, elder abuse is a crime that doesn’t always get reported because, in part, either the victims may be unable to report it themselves, or maybe they don’t want to report it,” Boston said. “Sometimes you’re embarrassed that someone has taken advantage of you. Other times, the person that has committed that wrong against you is a family member or a friend, and you don’t want to get them in trouble. And other times we see the concern that if you turn that person in, who is going to take care of you?”

Boston gave a quick talk June 24 peppered with “amens” and “that’s right” from the crowd between bingo rounds at the Atlanta-DeKalb senior center. Everyone who attended received literature on how to spot and report abuse, a water bottle, hand sanitizer and a medical records file packet to put on the refrigerator.

“Elders who experience abuse have a 300 percent higher risk of death,” Boston said. “We all know every single one of us is going to die one day. But it doesn’t have to be any earlier than the Lord wants to take us, right?”

Seniors are at risk for abuse and exploitation for a number of reasons, according to the U.S. Department of Health and Human Services Administration on Aging. Their physical and mental strength may not be as robust as a younger person’s, leading to exploitation. Caregivers may find themselves exasperated to the point of neglecting the elder’s needs–or lashing out in violence. And some seniors can even neglect themselves: while not abuse, it is still a problem that affects quality of life.

“It is a very difficult situation to come to a decision to prosecute or tell someone [about] being abused,” said Sheryl Harris, a six-year veteran victim advocate with the solicitor general’s office. “It’s kind of humiliating if it’s your own kids. The majority of our cases involve adult children who abuse their parents.”

Harris said the solicitor general’s office makes seniors feel less alone in confronting what can be a traumatic and ongoing issue.

“It makes them know that they have law enforcement behind them in case they come to the decision to prosecute,” she said. “It educates them as to what is in the legal system and gives them a sense of camaraderie. I think knowledge is always powerful.”

Abuse of the elderly, in addition to causing physical ailments such as bedsores or bruises and broken bones, can also hasten cognitive and psychological decline, according to a 2005 report in Clinics in Geriatric Medicine.

“Meaning, you’ve got more anxiety, more stress,” Boston said. “You don’t need that. You’re retired. As my mom says, ‘I’m re-wired. This is my time to enjoy, not to have extra stress.’”

Boston further said that elder abuse occurs without regard to monetary status, race or gender; it affects people in all kinds of situations.
“This is why we have to look out for each other,” Boston said.

Boston said that elder abuse in DeKalb County is a prevalent, but underreported problem. The cases reported are just the tip of the iceberg. Her office prosecutes the misdemeanor cases.

“There were 55 misdemeanor cases [in 2013], and there were obviously some cases that were felonies that went right to the district attorney’s office,” Boston said. “We know that there are way more than that.”

Boston said that the previous week a social worker at an event approached her and reported several incidents.

“It doesn’t matter that you’re coming to the senior center, there is still a possibility that someone is out there that needs help,” she said.

Annie Blakeley, 86, left shortly before the bingo was over but said she learned a few things she didn’t know. And although she is comfortable in her home, she said she is vigilant about being taken advantage of.

“Every day it crosses my mind,” Blakeley said. “I don’t think my people would abuse me. I don’t think. But I always worry about what might happen if I can’t do for myself anymore.”

Any sudden, unexplained physical ailments such as bruises, such psychological changes as becoming withdrawn or depression or poor hygiene can be signs of elder abuse. Concerned friends and family can contact Adult Protective Services, a division of the state government, for advice and help. Call 911 if there is immediate danger to the person.

This article originally appeared in The Champion Newspaper.